When an innovation is introduced into a market, it takes a number of year to ‘diffuse’ and penetrate the market. The adoption typically looks like an S-curve as shown in the following chart. The adoption curve provides a useful way to break down customers in five segment: innovators, early adopters, early majority, late majority, laggards. 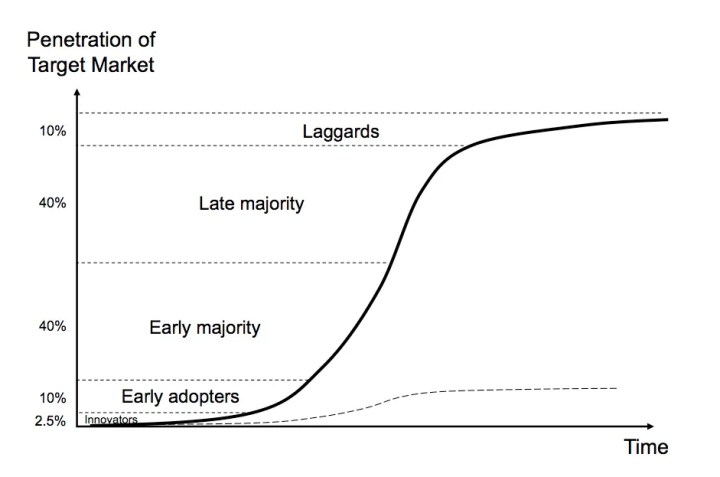 Innovators are the first to adopt new products and services. They are technology freaks par excellence, and like experimenting and playing around to find out what they can do with their new toys. Innovators typically represent a few percent of the target user base.

Early adopters also invest early on in new technologies, not as technologists, but to address their concrete problems.

Register today for free and download the five S-curve models to forecast demand in Excel.

The early majority is happy to wait and see until a main stream of users and technical standards have materialised under the influence of the early adopters. Only then are they ready to invest in innovation to satisfy concrete needs.

The late majority has similar characteristics and expectation as the early majority, except that they are risk averse and uncertain about their ability to master innovation.

Laggards are technology averse and resistant to change. If they buy technology at all it is because the technology has become so pervasive that they have little choice not to use it. As a market, they are usually of limited interest to technology sellers as they require low price, a lot of support and their profitability is the lowest. Laggards amount to about 10% of a total market.