Demand forecasting is closely related to the adoption of innovations within a target population. Looking back on the still recent dot.com bubble crash, one major mistake made by all of us was timing: we have often misjudged the speed of adoption of new, but often immature technologies and applications, and placed huge investment bets on the start-ups that developed them.

In order to avoid repeating the same mistakes in the future, we need to base our investment decision on better prediction models. Prediction tools must improve, and diffusion models can provide the starting point. Everett M. Rogers, who wrote “Diffusion of Innovations” more than 40 years ago, has provided us with a powerful framework.

Rogers has extensively investigated since the 1950s how innovations diffuse in society, and has introduced the notion of S-curve, an S-shaped curve that shows how usage of an innovation evolves in a population over time. 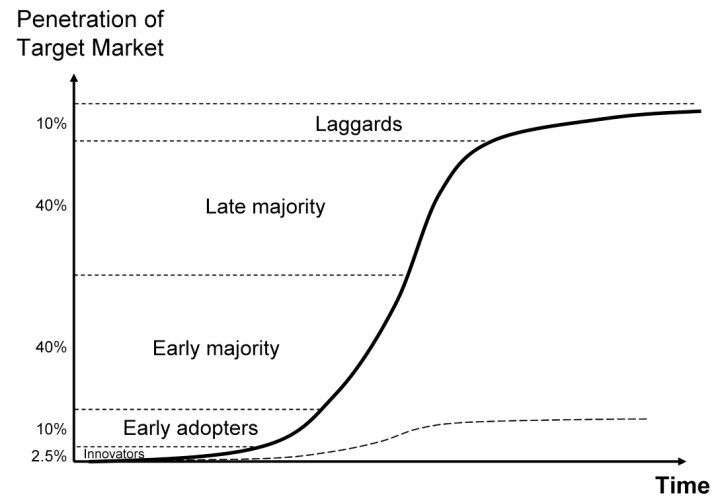 His famous S-curve can be broken down in five distinct user segments and phases, also described particularly well by Geoffrey Moore in “Crossing the chasm”.

Note that some innovations stagnate in the early adopter market and fail to reach critical mass to develop to the following stages. The transition from the early adopters to the early majority can be particularly challenging, as described by Moore in “Crossing the Chasm”. As marketers the best approach is to look at the five categories of adopters as different target segments to be addressed sequentially, usually with different products, communication messages and sales channels to meet the specific needs of each segment.

The self-sustaining pattern of growth in the early majority phase has been extensively documented in innovation diffusion, and attempts have been made to model the effect. For example the Bass diffusion model has specific factors for early adopters and imitators (early majority) in a market – see the S-Curve page.