On the supply side, uncertainties can also be large, especially the availability of new technologies, their costs evolution and their respective benefits. However, the challenges on the supply side are not as great as on the demand side, and reasonably accurate forecasts can be derived following careful analysis.

The uncertainty on the supply side mostly relates to the availability, the capability and the costs of existing and future technologies. Uncertainty can be considerably reduced by talking to hardware manufacturers, chipset makers, suppliers of enabling technologies, technical experts working in research centres, as well as analysts specialising in technology innovation.

The good news is that many technology characteristics display constant growth rate over time. This means that capacity is growing exponentially and when plotted on a logarithmic scale, capacity is a linear function of time. 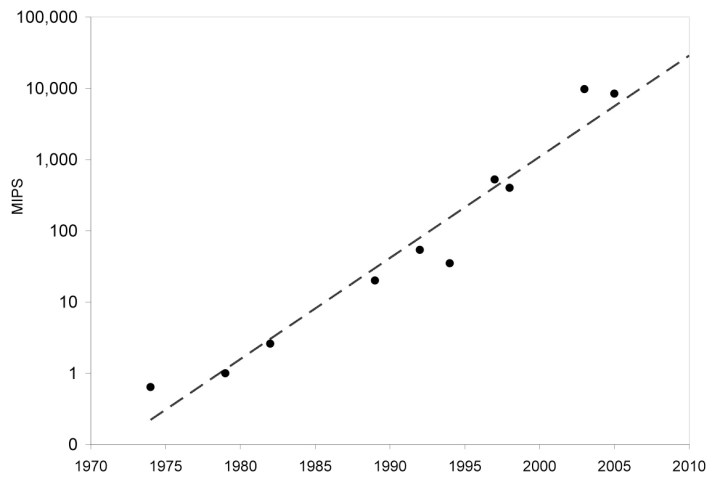 This is especially the case at the component level, as shown by the following examples.

That the IT and consumer electronics industry could maintain growth rate between 30% and 60% over long periods of time is really remarkable, not only because of the great technical performance enhancements involved, but also because of the seemingly insatiable readiness of the market to absorb those capacity increases and build new products around them.

We rarely have time to stop for a second and appreciate what an exponential growth of 40% per annum really means in absolute term:

Applying the same process backwards illustrates the extraordinary achievement in reducing the size and density of transistor on a chip: if a transistor of the early 1970s were to be magnified to the size of a 1.80m adult, then our transistor of the year 2007 would have a size smaller than that of an ant. If the airplane industry had made the same progress as the microelectronics industry in the last 30 years, then flying from London to Sydney would take 4.5 minutes, and the flight ticket would cost less than 10 cent.