Sometimes, the environment in which a company operates is so uncertain that it seems that anything could happen. This is in particular the case when new technologies and industries are emerging: the product is unclear, the applications and the end-user demand are unclear, the business model is unclear, and the competition is unclear. In this situation a scenario planning exercise is particularly useful to identify the main scenarios that might unfold and clarify how the future could look like. Scenario planning allows you to generate a first set of forecasts, identify the key signposts that distinguish one scenario versus another, and understand whether the company’s current strategy and product roadmap are robust across multiple scenarios.

The good news about scenario planning is that there is no rocket science behind it: it is mostly straightforward and can be great fun. Ideally, it should be undertaken over a period of 4-6 weeks by a small group of people bringing various backgrounds and sufficiently diverse opinions to the table. In scenario planning you should be bold and think outside the beaten track to develop multiple pictures of the future world. These must be clearly different from one another to be valuable, but at the same time remain realistic. The forecasting horizon will typically be two or more product life cycles, and ranges between 4 and 30 years.

The methodology behind scenario planning can be broken down into six main  steps.

Scenario planning starts with a brainstorming session where issues that are likely to influence the business are collected in an open-minded manner.  Be receptive to unusual ideas and do not apply any value judgment nor prioritise the issues at this stage.

Draw the four quadrants of a matrix that has “rather certain versus very uncertain” as its X axis and “low impact versus large impact” as its Y axis.  Position the issues identified in Step 1 in the matrix.  From the (Very uncertain, Large impact) quadrant, identify the key dimensions to be used to further define the scenarios.

Define the potential outcomes for the critically uncertain issues identified in Step 2.  Group the possible outcomes of each dimension into a self-consistent scenario and define a minimum of three scenarios and a maximum of five.  Each scenario should be clearly different from the others.

Write the story behind each scenario and give it a title summarising its salient features.  Also identify the sign-posts or observable events for each scenario, and prepare an indicative roadmap showing in which time frame the events are expected to materialise.   From each market scenario, develop a business strategy.  Identify “no regret moves”, which are actions that make sense whatever the future turns out to bring. 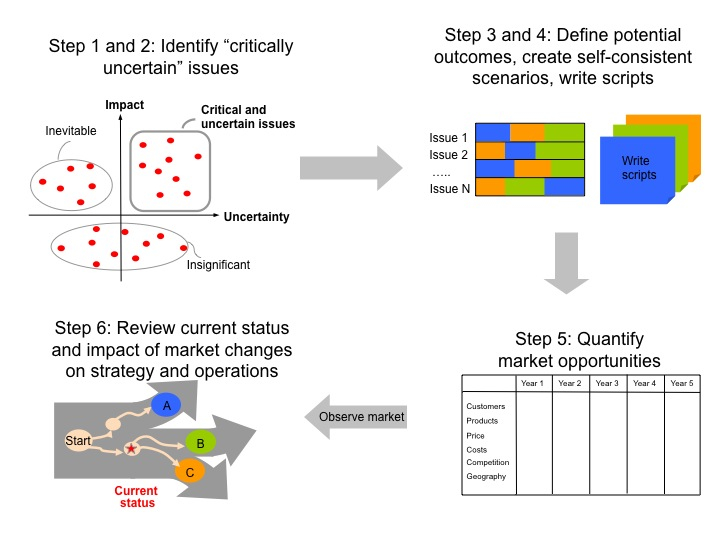 Observe the market and especially the sign-posts identified in Step 4.  Update the scenario planning results accordingly, typically every 6 months, by repeating Step 4 and 5.  Review the impact of the market evolution on your company strategy and operations.